Unpopular Versions of Diamond Find I Have Made

It began with a series of barely legible comics. Shannon and her bowtied cobra friend run a diamond-finding agency, and their adventures always end in unequivocal success. 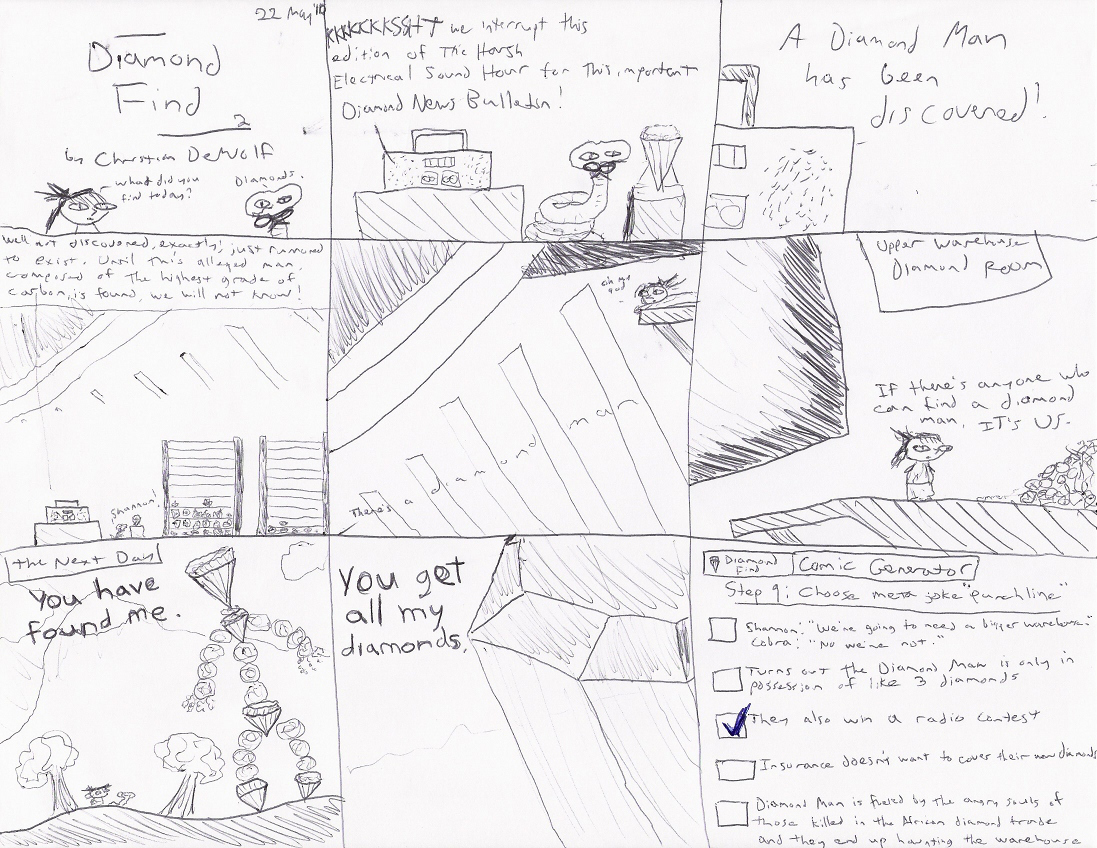 Who's to say why? But that was the premise of the series, and I mailed the comics to a friend, which I was doing at the time.

But in the fall of 2011, I had an idea for an interactive story based on this concept. It would be a binary tree format, every node splitting off with two decisions: 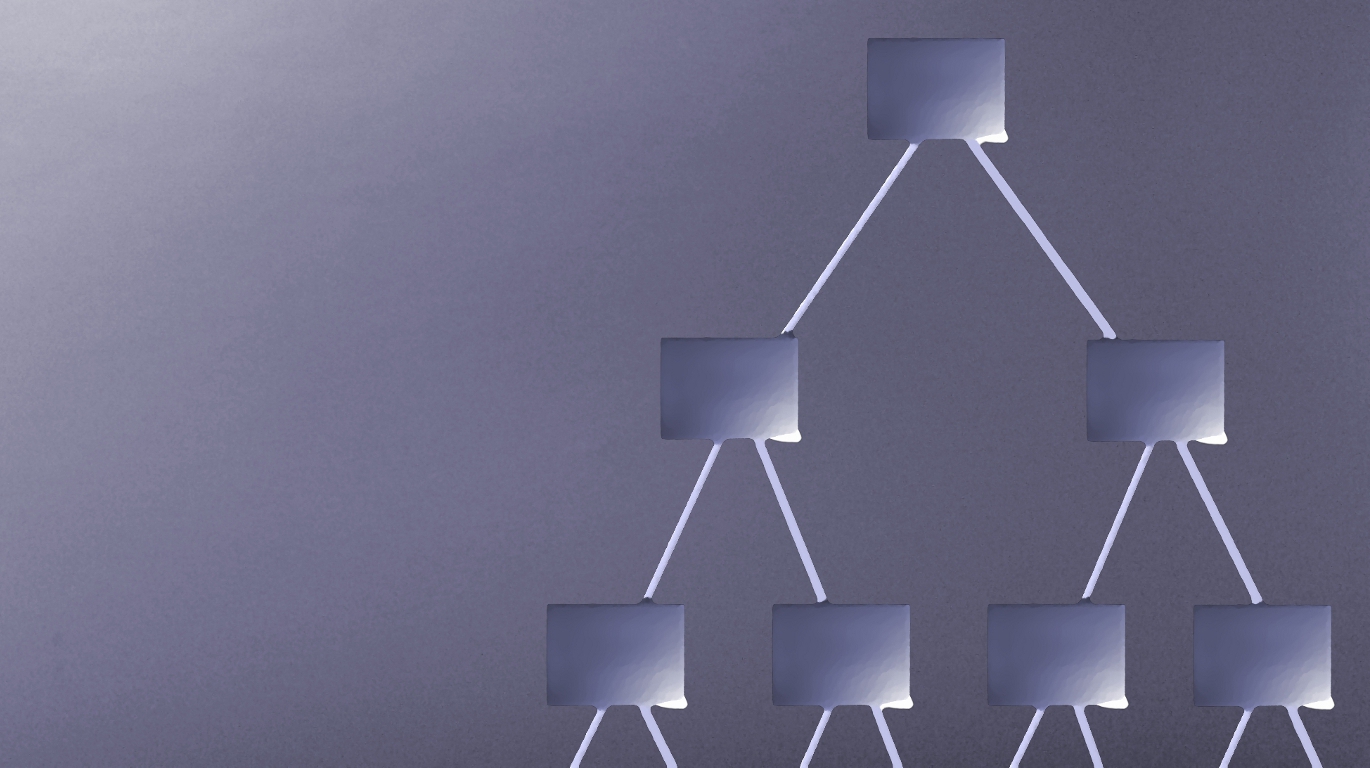 These tend to get big very quickly.

But how large an interactive story could I make? With each increase in depth level, my workload would double. Would it even be good?

After some calculations, I set my limit at 10 levels, which would make a story of 1023 nodes. It was big enough to be interesting, but still feasible to complete. I became obsessed, and so sat down and wrote a Java program that would help me compose this masterpiece.

It was a long winter, and the finished game was over 80,000 words of diamond-finding adventures, with 512 different endings.

A minimal reader did the job, and with some basic character art from my friend Lara, it was playable: 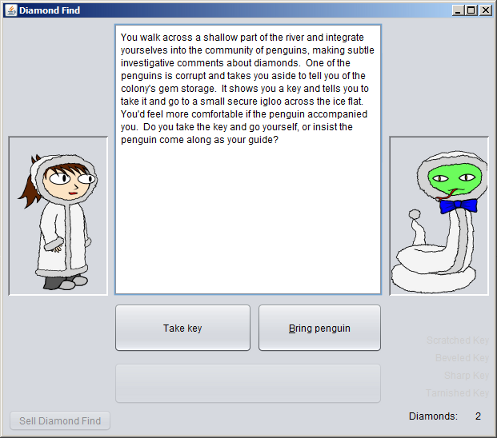 I sent it around for editing and testing, but at this point I knew it could be more. I added a second data tree with more encounters and B-stories, and a questionable storyline where the Feds send their best profiler to hunt you down after you assassinate a city councillor for a diamond.

The obvious next step was mobile.

Designing the game for a phone presented the challenge of text size — how to fit the story content into a screen so small? I was also thinking ahead to smartwatches, which were just emerging as a new medium. The answer was obvious – only show one word on the screen at once!

The ONLY way to practice speed-reading!

But it languished in the app store – extremely low quality, and without any marketing, it was dead in the water!

I did up some banner ads and pumped up the marketing dollars, and soon, I was getting clicks. But not many. As time wore on, changes in the Android platform were making it hard to keep the code up to date, and eventually, I unpublished the damned thing. It was probably an epilepsy hazard anyway.

Luckily, since it hadn't gone mainstream, Diamond Find could still be "cool". I definitely wanted to capture a hip demographic, and market research pointed straight to vinyl. While it took a bit of editing, I managed to fit the game onto two sides of an LP, and pressed a limited edition copy: 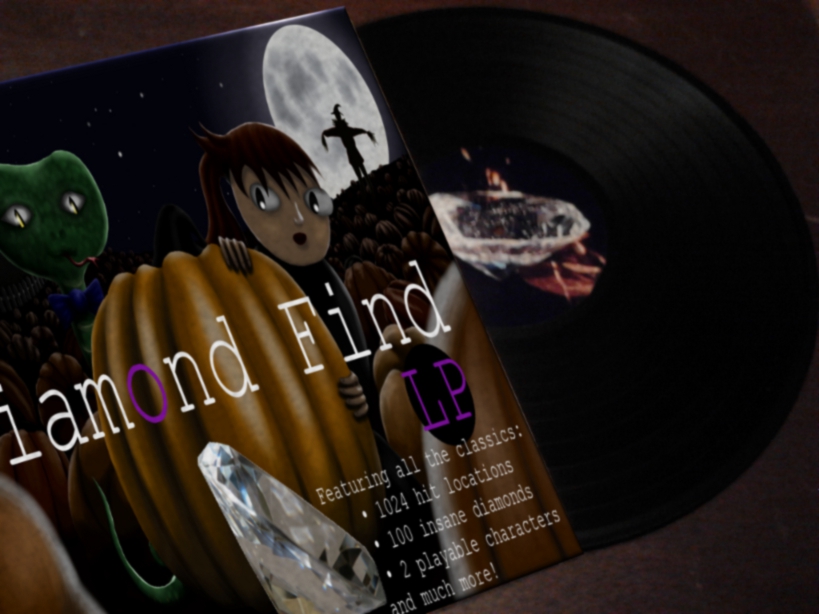 However, it failed to attract a minimum bid at auction, and thus remains unsold and in mint condition. This collector’s item could be yours for the right price! Serious inquiries only, please.

After dismissing the idea to port the game to Apple devices, I decided to make a website where people could play Diamond Find for free! At first, the plan was to implement it in Ruby on Rails, and thus I ported the game to Ruby, creating a terminal-based skeleton:

Functional, but I was still more comfortable with Java at the time, and shelved Terminus after only a week.

More ambitious than what I reasonably had time and money to build, the FractalFic platform was designed not only to run Diamond Find, but also to allow users to write and publish their own "fractal" adventures. For mass appeal, I even watered down the city councillor murder plot by making the gun chocolate.

Without the constraints of mobile, the visual aspect could be amplified, with art for every scene! I took the rest of the old character art and did up some pixellated "retro" style graphics with lots of lens flare: 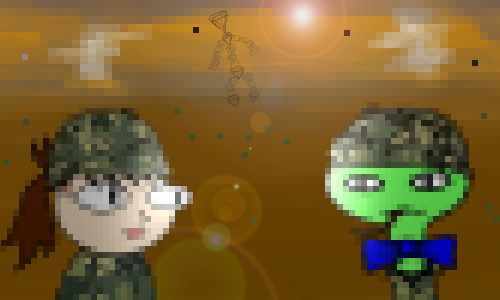 Shannon and Cobra encounter the Diamond Man on the battlefield. 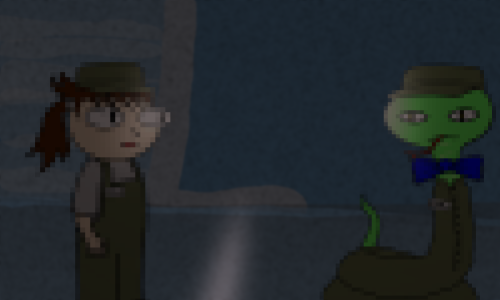 Our heroes sneak into a Diamond Center stairwell, disguised in maintenance uniforms. 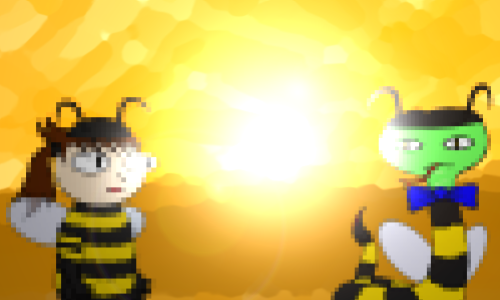 My brother, who'd helped with some of the Java stuff earlier on, threw in a few hand-drawn scenes of his own: 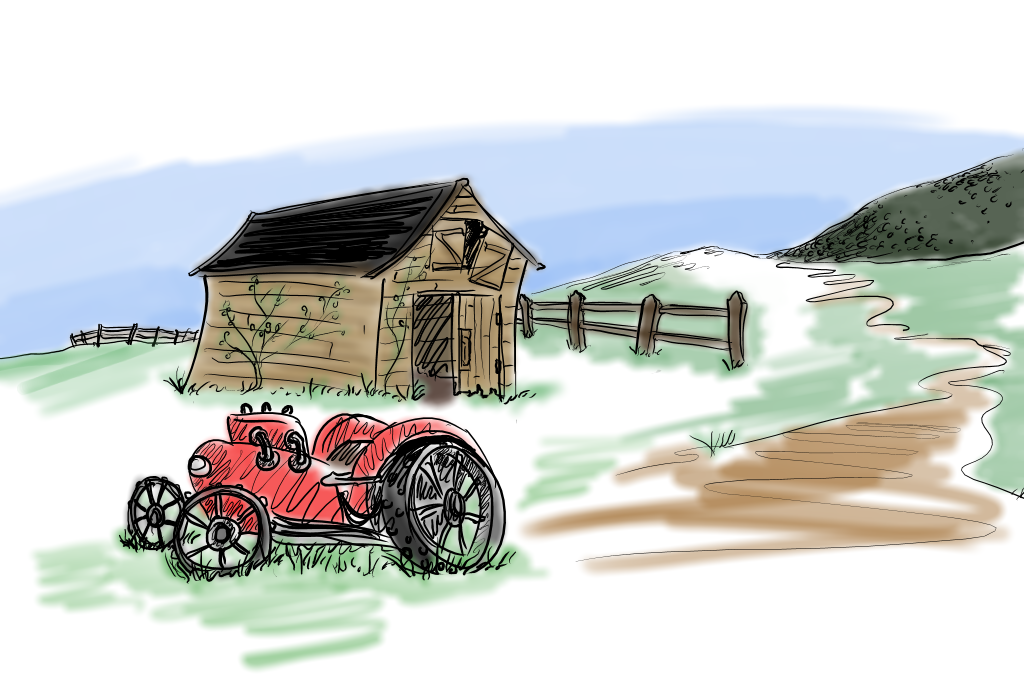 Farm or foothills? An early decision in the game. 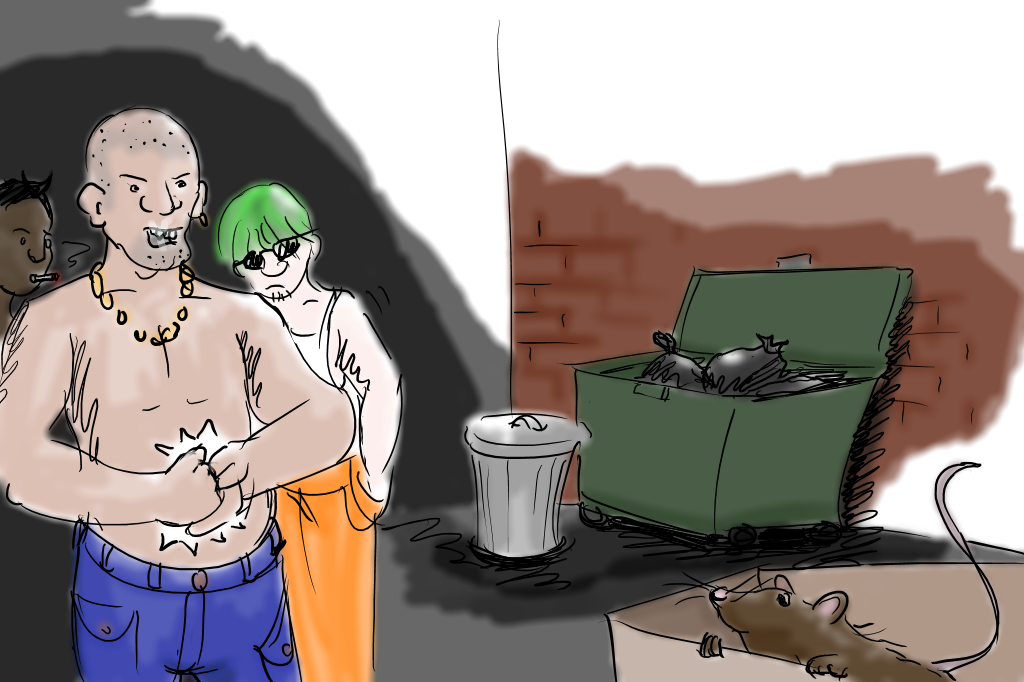 Fight the gang or flee down the rat-infested alley? This is my favourite one, for obvious reasons. 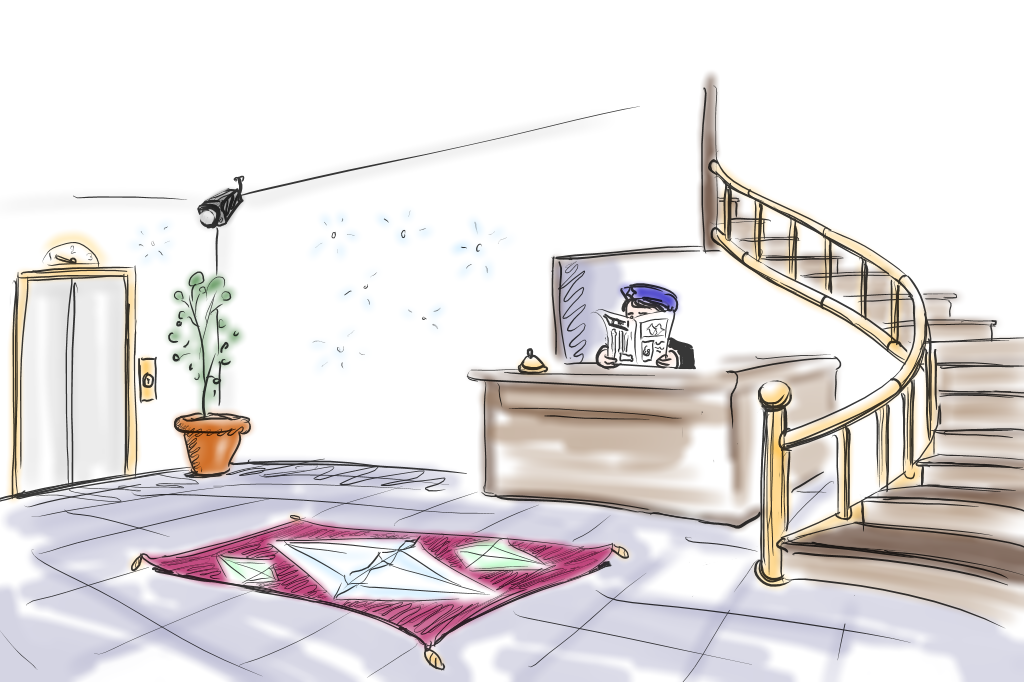 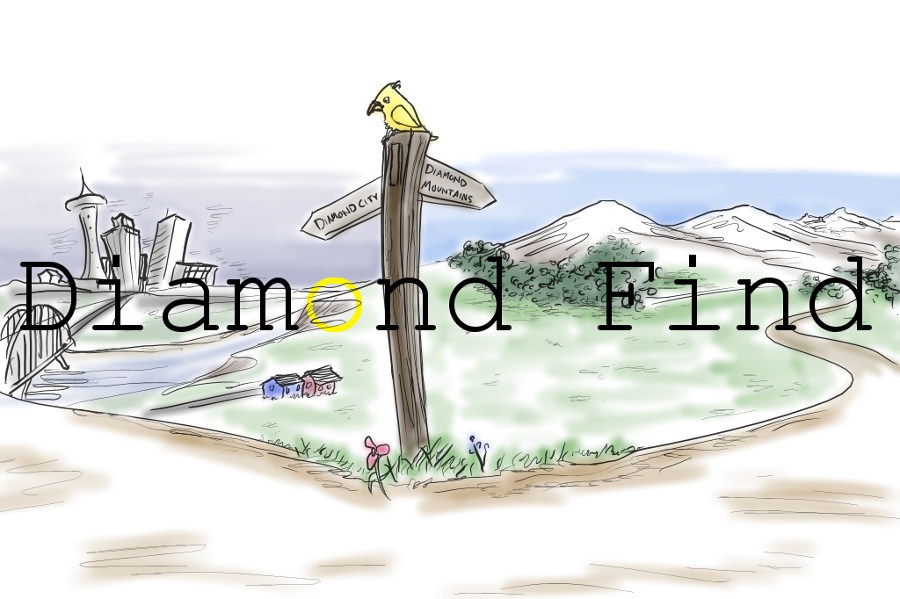 This was going to be the title screen at one point.

The platform, however, was a failure. Despite receiving some press coverage (from ClamBlog), only a few people ever wrote stories, and the cost of running the server was not offset by the “freemium” pricing model. It ran for a year and a half before I pulled the plug.

It drove me into debt and depression, but the skills I learned during its build were enough to secure me an entry-level dev job. Success!

But I couldn’t just let Diamond Find die. Years later, now proficient in Ruby on Rails, I knew I could implement a new version in a very short time. And did I ever! But it looked like shit: 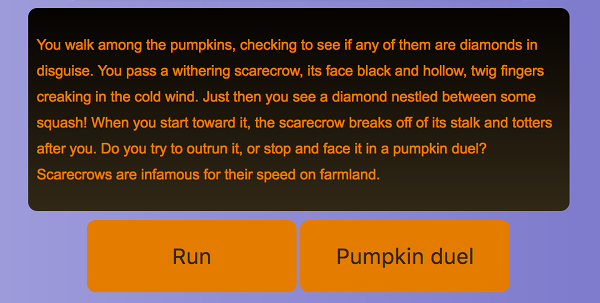 Did an insane person design this?!

Abandoning the scene art, I had tried a thing where the palettes changed depending on your location, and it just ended up being terrible. However, it added the capability of saving all your diamonds to your profile and downloading HD versions as wallpapers, which I think was cool.

At this point, the Diamond Find server has been whirring along for a few years, providing the occasional website visitor with a madcap diamond adventure for absolutely no cost. But all things grow stale, and with this year's taxes completed, it was the perfect time to give ol' DiFi a visual overhaul and a full text edit. 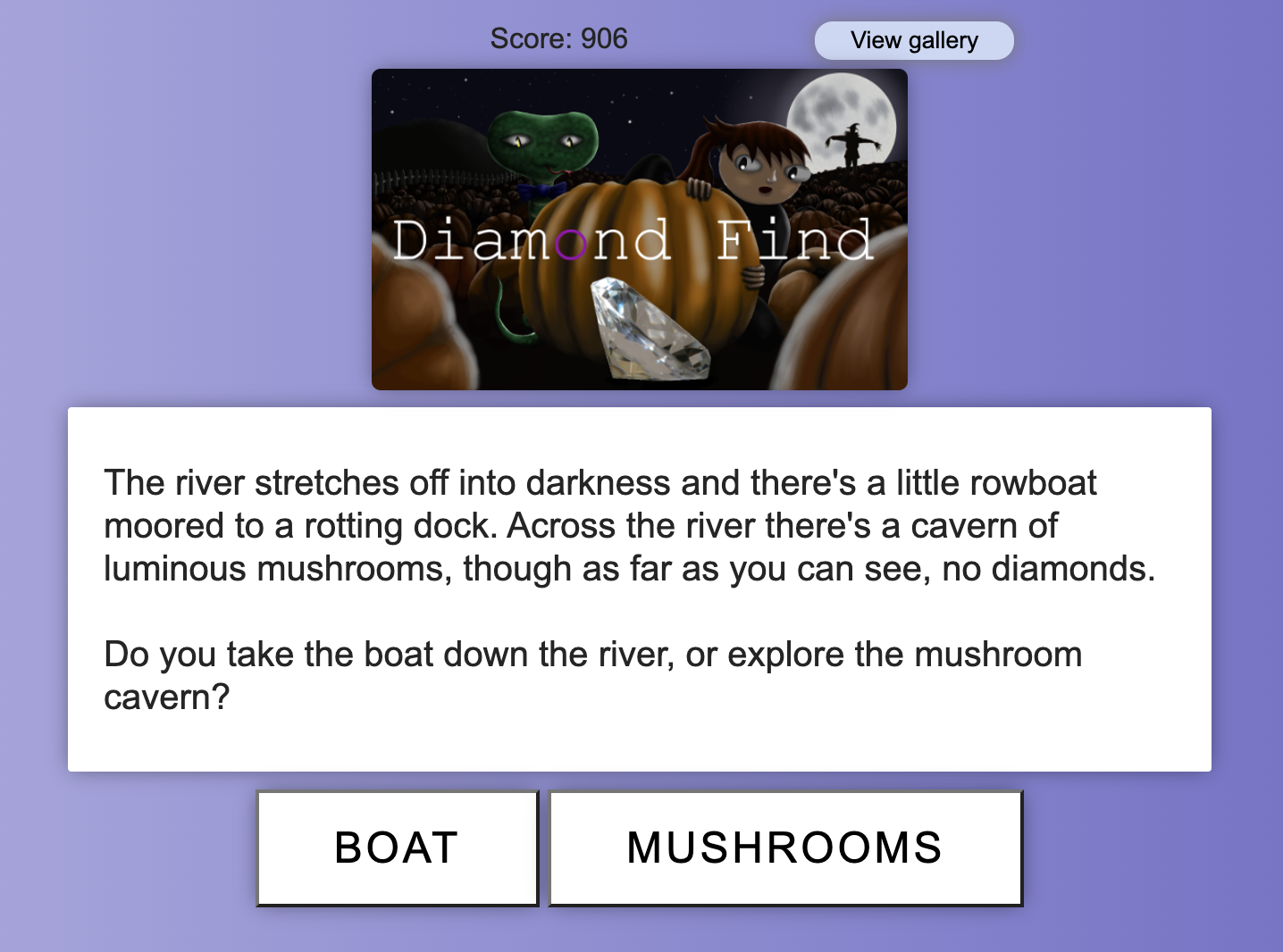 Could this be the best version of Diamond Find ever? I guess you'll just have to play it and find out.

But please don't tell me if you find any bugs, because I am NOT wasting any more time on this stupid fucking game.

Animal-Themed Moves You Can Try When Playing Go